Some of you, not all, will get this but my dog Sparky, who passed the other day, was one of those exceptional dogs. He was a dog with human eyes. He seemed to understand you all too well to the point it was a little freaky and not just once – over and over the course of his sixteen year life. I have three other dogs who are all sweet and goofy but they are not anything like Sparky was. Even how we came to meet was not your typical story and since I went to the trouble of building a web site to blather on about stuff on I am going to relate that story to you.

First off “how I came to meet” may seem an odd phrase when describing how you got a dog but really is the best way to describe it. Way back in the year 2000 (ok that does not sound way back but anyway…) I was living in a small neighborhood in the middle of the sticks in Park Hill, OK and I had an old 68 dodge dart that I bought for $500 and a salary that would make a night stocker at Walmart snigger.  As I was laying in the drive way, my head once again jammed under that car, fixing whatever the problem of the day was – a rotted brake line I think – a cold wet nose with no small amount of gusto wedged itself briefly in the plumber’s crack I was unknowingly displaying. Since I didnt own a dog, could not afford a dog, the surprise inspection resulted in me slamming my head into the bottom of the car so hard that the world literally swam around me. After a pretty good amount of cursing and wiggling about and checking I was not bleeding more than usual (if you have worked on old cars you know what I mean) I finally got out and found this dog standing right next to me with, I swear to God, a grin on his face. Needless to say “pissed off” lasted about one second and then I started to laugh. I scratched his ears and told him he better get home then shimmied back under the car to complete my repairs. When I got back out, am pretty sure I was replacing a brake line, he was curled up at the base of a tree in my front yard asleep. He stayed right there the whole time I finished up bleeding the brakes. When I got totally done he followed me up to the porch where again I told him he better go home but at this point I had pretty well figured out that someone had probably dumped the poor guy in the country. He ignored me and curled up next to the front door like that was just normal.

Things were tight and I knew we couldn’t afford another mouth to feed but at some point I made the decision (I think some begging by kids played a part) that if he was still there in the morning he could stay. So bright and early the next morn I opened the front door and there he was in the same spot.  I said “Well if you are gonna stay you best come in the house.” and in his first aforementioned act of bizarrely understanding me – he walked right in like it was something he did every day. I did not train Sparky  – he just did what you told him to do. Out, In, Stay, Lay down, Fetch, Walk with the leash – all that and am pretty sure he had never even wore a collar until I put one on him. When I saved up enough for shots the vet told me that he was only one year old.

Sparky was not a “fur baby” he was a friend, another guy in my house – never like another child. There was a mutual respect between us. He kept the yard critter free, let me know if someone was around, didn’t trust another human unless I told him he could (seriously – am not making this stuff up) ran off other strays. We kept him happy and healthy and loved.

One thing Sparky hated was having his picture taken. Most of the pictures I have of him I had to take super fast as he would duck or turn anytime you pointed a camera or phone his way – I am not sure why or how he knew to this day. He never flinched away from anything else I ever held in my hands. So this following picture, the one me and the wife posted on facebook is a special one. She did not tell the story on Facebook but he actually posed for it. You see she loooves dogs and was trying hard to get a good picture of him and he did his usual duck and dodge but she followed him and he laid down and closed his eyes. At that point she was exasperated and told him “Fine I will just take a picture of you sleeping!” and then went to fiddle with something in the closet – just moment later Sparky got up walked over and sat right down in front of her and sat perfectly still letting her take a picture and then he got up walked away laid down and went back to sleep. As I said.. an exceptional dog. 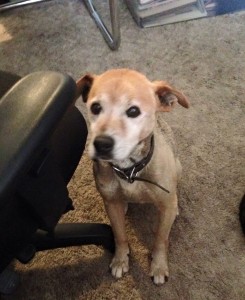 “Do not go gentle into that good night,
Old age should burn and rave at close of day;
Rage, rage against the dying of the light.”

The first stanza of Dylan Thomas’ famous poem sums up how Sparky went. He did not go find a place to curl up and die – it looked to me that the old boy was on his feet until he fell over dead. He went as he came – not in any typical dog-like fashion at all. At the end he was mostly blind and going deaf but he would force himself up to walk around and around the yard until he gave out over and over again these past few months. He didn’t stop eating or drinking either. He was not going gentle at all.

So burying such a dog… that was hard. I wanted, for some reason, to know exactly where he was so I went and bought a tree and dug a really deep hole and buried him beneath an apple tree in the back yard. You can sweat out an amount of grief – it covers tears pretty well. I think he would have liked the tree.

I saw a documentary that related that dogs are the only animals born with instincts that allow them to recognize human facial expressions. I believe it. Why are dogs so different from other animals? I think God wanted us to see what real actual unconditional love looked like in the flesh. Dogs simply put make better human beings out of those who take the time to care for them.