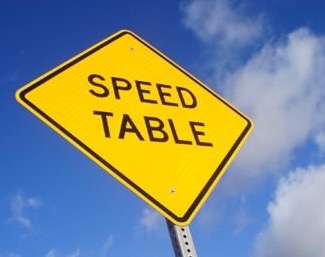 No not that kind 😛

I got this idea to move my evening snackage and coffee closer to my face – laziness being the mother of “OMG what is that in the garage…” Basically I needed a taller end table and being the cheapskate I am also had a bunch of 2×4 end cuts that I could not bring myself to pitch and the speed table was born. 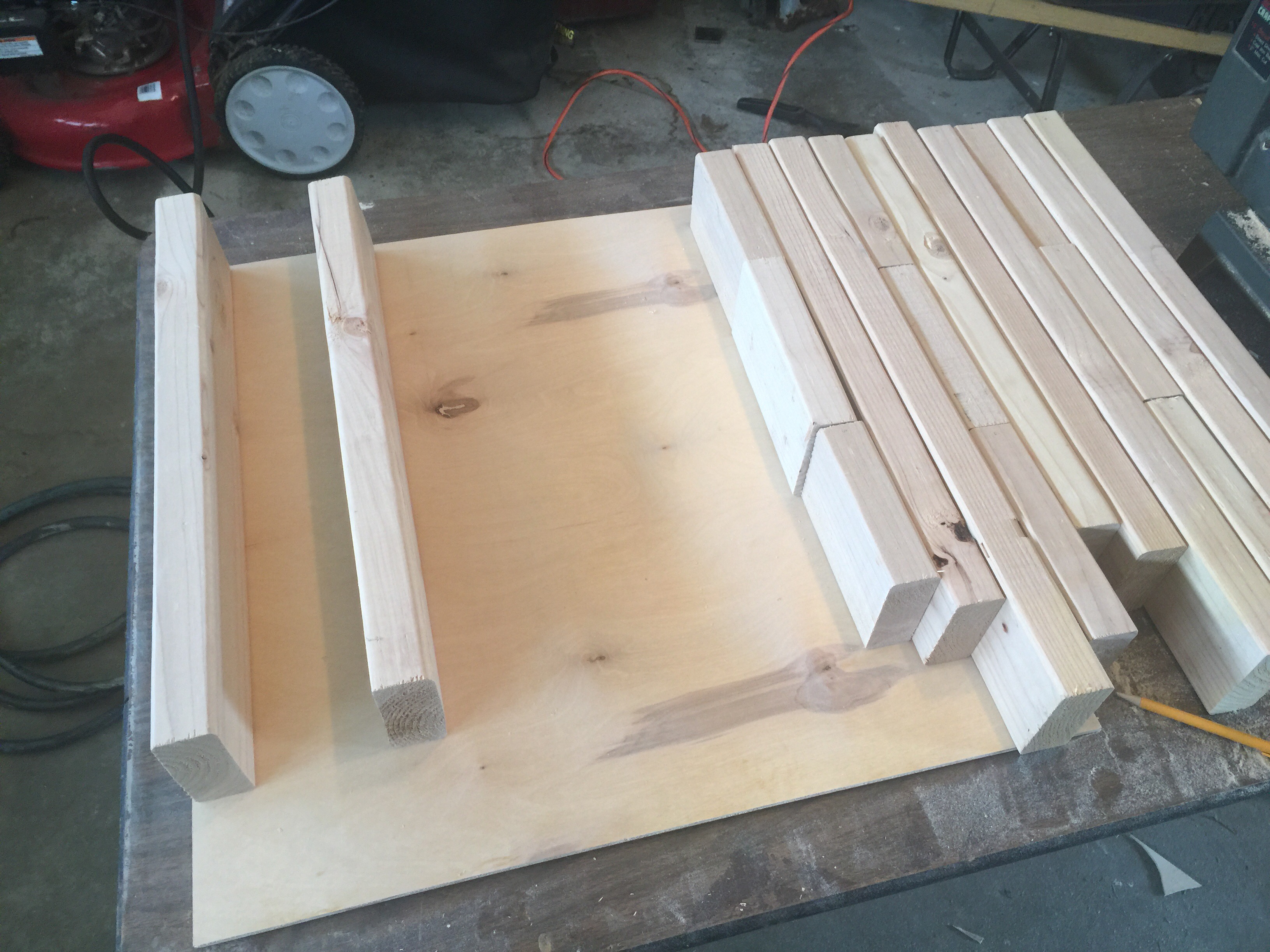 Actually was gonna make a dull square top table but once I laid out all my various wood bits I had a sound effect go off in my head – whoosh. It was the pattern of the wood or an aneurysm time will tell. Using a framing nailer and glue I put together a poor man’s butcher block basically. I realized when piecing it together that this was NOT gonna turn out all perfect some bits were wonky keeping with the fact that one out of three studs from Lowes seems to be yearning to be a bow or corkscrew. Accepting that was fine but the top needed to be flat keeping with my lofty expectation of keeping a coffee cup safely two foot off the floor. 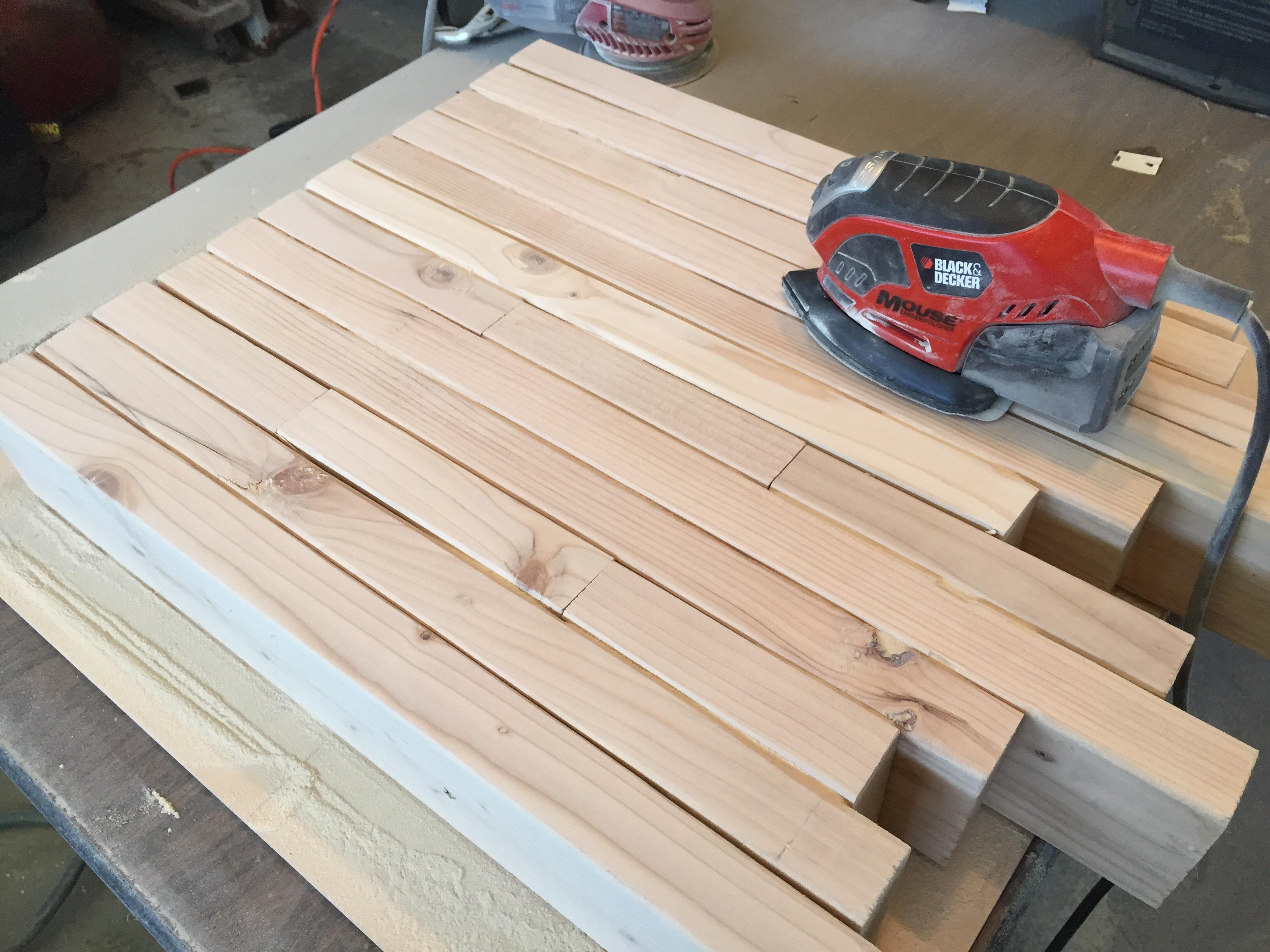 So I sanded. Then I sanded more working through 40, 80, 120 grit on a couple of orbital sanders followed with a nice massage with a 200 grit sanding sponge. I swear they put a quarter inch round on the edges just to frustrate me personally. Then followed all that by 3 Tylenol and 3 beers cause am old.

I put together the legs with some firing strips and 2x2s – nothing crazy innovative but the bottom is barely seen where it will go in the den. Then I slapped on some Minwax Polyshades Mahogany stain I also had left over from another project. 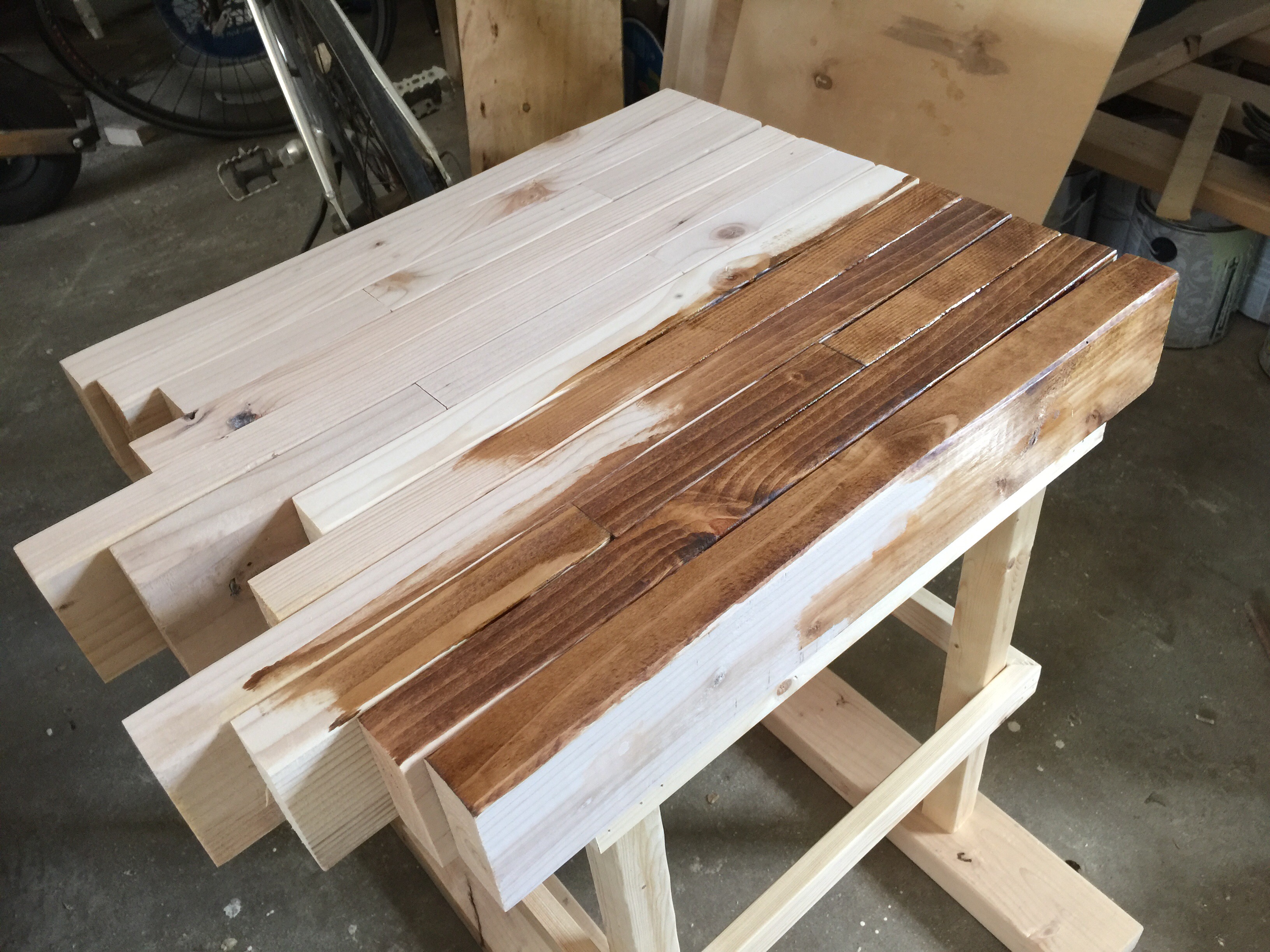 That first swipe of stain makes me giddy hehehe…. 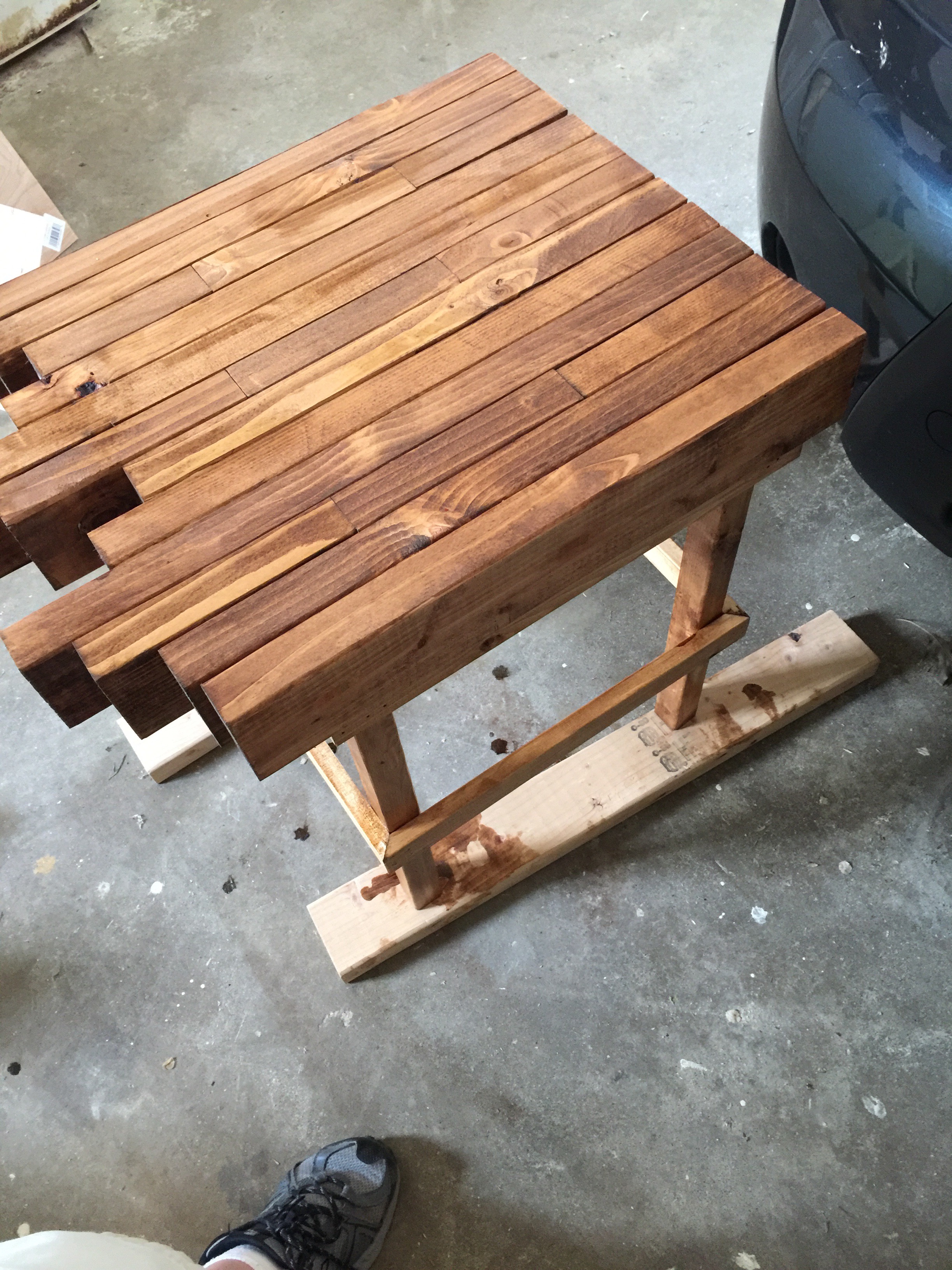 By this point the fumes made me giddy…. Note to self open garage door. 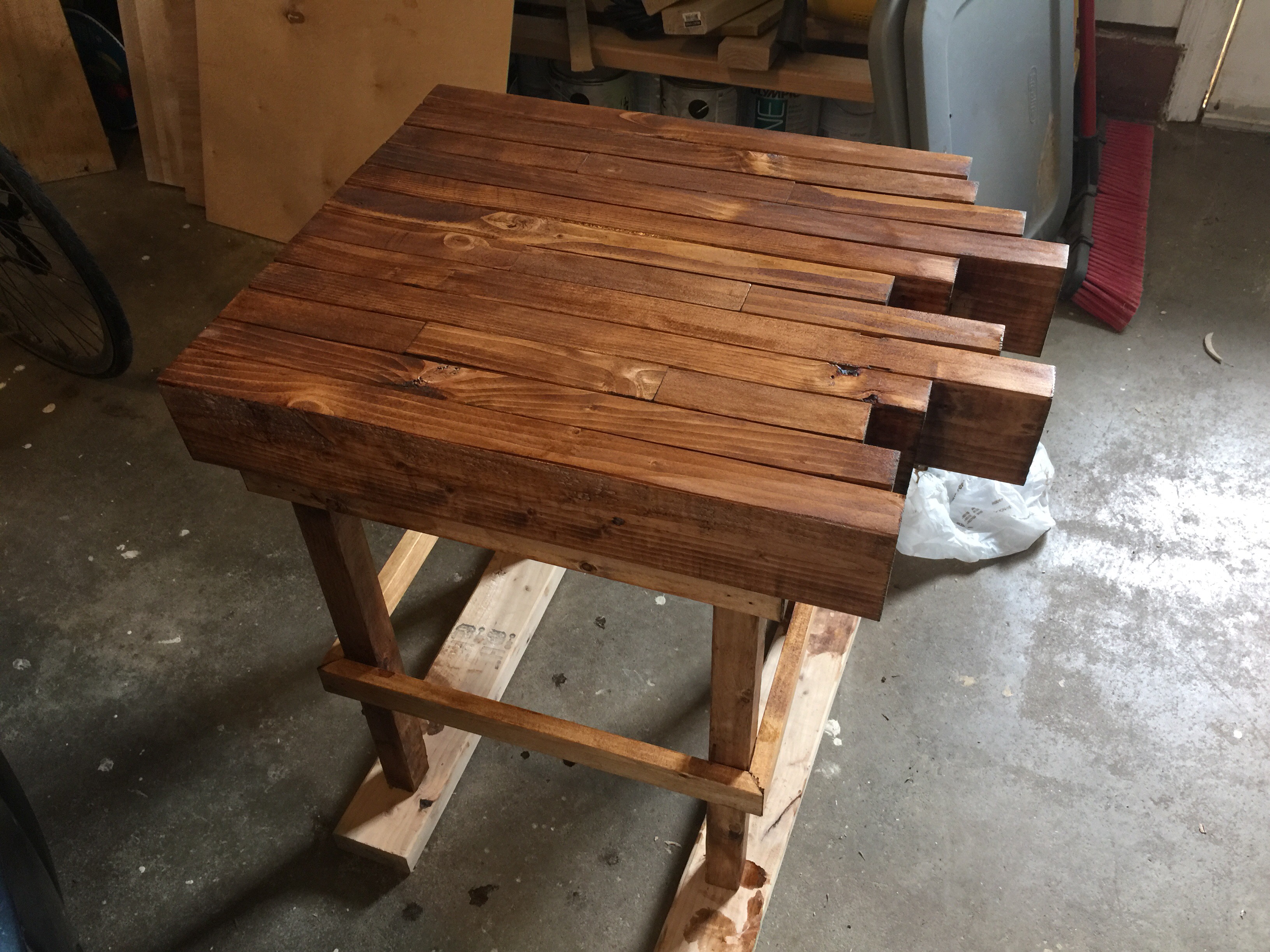 Thar she blows with two coats and a saucy looking whoosh if I ever saw one. Last step put it in place and…. 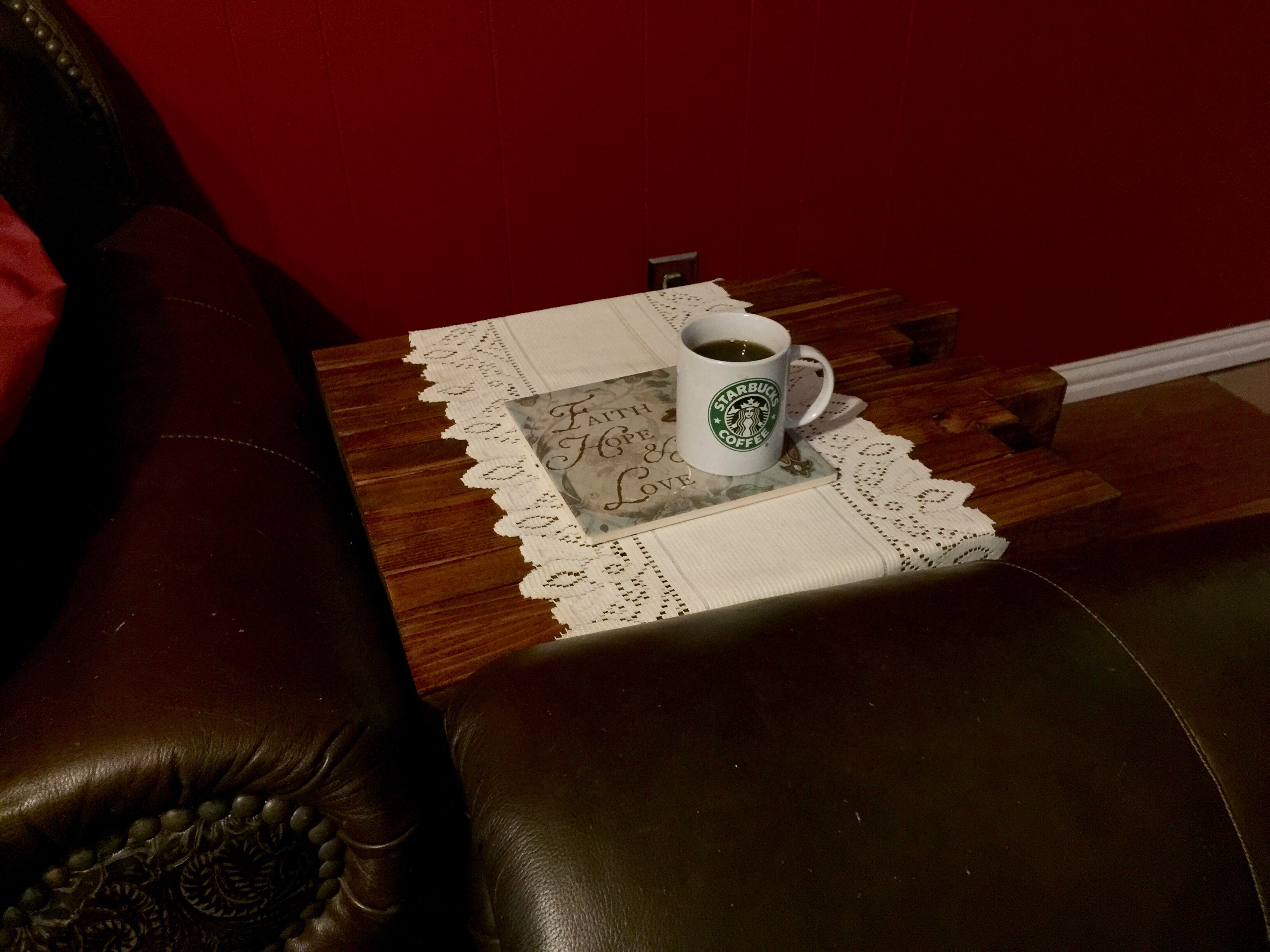 Kappow! Wife instantly frosts it with a doily. Mission accomplished!

While I am not exactly an ace at fine carpentry thought this turned out pretty good and someone looking to utilize scrap might like the idea. Now on to making that nuclear reactor out of a sheet of plywood and bailing wire bits … See ya later…. Maybe…